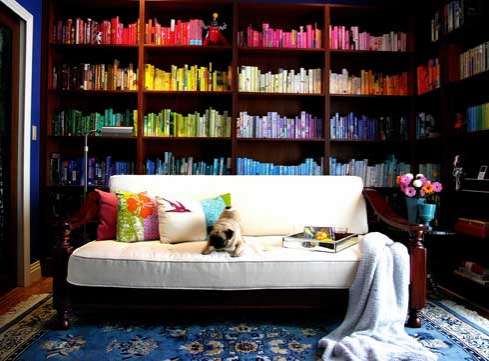 Chotda organized his extensive library by jacket color, putting all red books, orange, yellow, green, blue and purple together, in the order of the rainbow. He uploaded the photos on Flickr, and now his creative rainbow shelf is getting tons of exposure on the web. There's even a Flickr photo pool called "The Rainbow of Books" in which his photos are featured.

Perhaps he was inspired by the Adobe Bookshop in San Fransisco, a bookstore where every single book is cataloged by color! Photos of the store are featured as the third and fourth images in the gallery.

A design like this is perfect for the obsessive compulsive person who adore vibrant shades in their home. I swear I don't have OCD, I just love the way the colours look, especially with the stark contrast of the dark wood bookshelf!