29 Yachts Worthy of Your Mega Millions 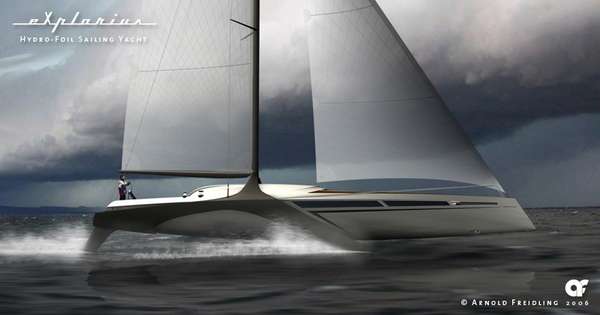 Alexandra Choli — February 15, 2009 — Eco
References: freidling
Share on Facebook Share on Twitter Share on LinkedIn Share on Pinterest
After an extended period of steady development, the time seems just right to revolutionize yet another means of transportation, the sailing yacht. That is the aspiration of ‘eXplorius,’ an ambitious concept that introduces hydrofoil technology to significantly enhance the vessel’s performance, ditching the traditional bulky keel.

A hydrofoil consists of an underwater wing profile which, similar to the wing of an airplane, produces a lifting force, elevating the boat above water and thus reducing frictional forces. Apart from enabling considerably higher cruising speeds, the V-shaped variation of the hydrofoil design also stabilizes the boat sideways and automatically adjusts the height of the flight. The ingenious design has received the Pininfarina Design Award in 2006 and the RedDot Design Award in 2007.

Associated with exotic retreats and adventurous travel, sailing is a thrilling experience for those captivated by the beauty of the sea and the grandeur of the oceans. Some overjoyed sailors will hopefully be offered the unique feeling of this edgy mono-hull, speedily yet smoothly gliding tilted on the sea surface. If ‘eXplorius’ was not still a concept, the article would be long finished and I would be packing my sailing gear about now.
5.2
Score
Popularity
Activity
Freshness
Get the 2021 Trend Report FREE