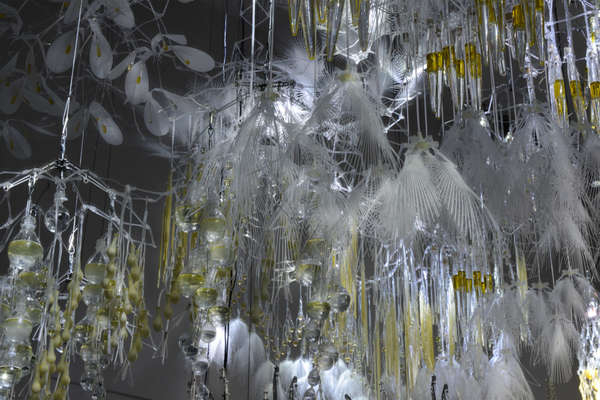 Meghan Young — August 16, 2013 — Art & Design
References: philipbeesleyarchitect & theverge
Share on Facebook Share on Twitter Share on LinkedIn Share on Pinterest
Radiant Soil by Philip Beesley, an architect based in Toronto, Canada, is the latest installation of the Hyozolic series. Described as 'metabolic architecture' by the mastermind behind it, the Hyzolic series is absolutely mind-boggling. The structures look like alien eggs. It is this futuristic feature that gives the organic creations a surreal appeal.

Made out of metals, glass and polymers, Radiant Soil by Philip Beesley also boasts motion-tracking and touch sensors in order to react to viewers' motions. If touched, the structures quiver as soft air moves through its pores. When it detects movement, the LED lights flash and ripple.

Currently on display at the EDF Fondation in Paris, France, Radiant Soil by Philip Beesley "a step toward a new, more immersive paradigm of architectural language," as noted by The Verge.
4.6
Score
Popularity
Activity
Freshness
Attend Future Festival Virtual