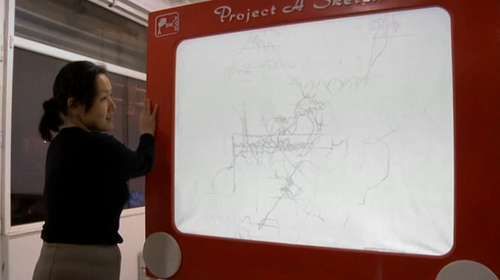 Meghan Young — March 14, 2011 — Life-Stages
References: hacman.org.uk & neatorama
Share on Facebook Share on Twitter Share on LinkedIn Share on Pinterest
It's all about going down memory lane and satisfying those nostalgic tendencies we all suffer from time to time and the Project-A-Sketch is just another way to do so. A fun take on the retro toy tablet known as the Etch-A-Sketch, this giant installation is playfully interactive.

Created by HAC:Manchester (a hackerspace community in Manchester, UK), the Project-A-Sketch features a projector that, well, projects the image onto the blank screen -- hence why it was called 'Project'-A-Sketch.'

According to Neatorama, "An arduino controller permits the knobs to be used in the traditional manner of the classic toy." Also like the toy, one simply needs to shake the Project-A-Sketch to gradually erase the image created. Fun and simple, you read a more in-depth post about how they created it on the HacMan website.
0.8
Score
Popularity
Activity
Freshness
Get Better and Faster