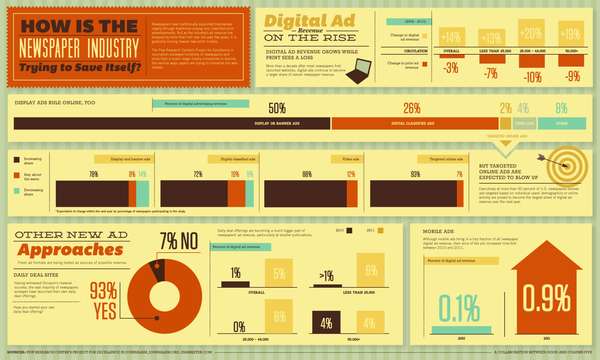 Pew Research Examines How Newspapers are Levering the Web for Profits

Sarah Nazim — June 6, 2012 — Tech
References: pewresearch.org & awesome.good.is
Share on Facebook Share on Twitter Share on LinkedIn Share on Pinterest
In this infographic, the Pew Research Center looks at how traditional print newspapers are leveraging the web to make profits in order to sustain business. Hundreds of newspapers, and more than a dozen media firms were surveyed in this study.

It is no surprise that digital ad revenue is on the rise while physical print is at a loss, due to the increase in technological dependencies such as laptops, tablets and smartphones. People will no longer go out of their way to purchase a newspaper when they can simply log online to get their daily dose of updates. Even the return on digital advertisements is higher than traditional methods; display and banner ads seem to be the most effective, according to this infographic.

Daily deal advertisement sites such as Groupon is doing fairly well in comparison to mobile ads. As we continue to move more into the digital realm, it's important for companies to adapt to the shift, in order to sustain viability.
2.3
Score
Popularity
Activity
Freshness
View Innovation Webinars