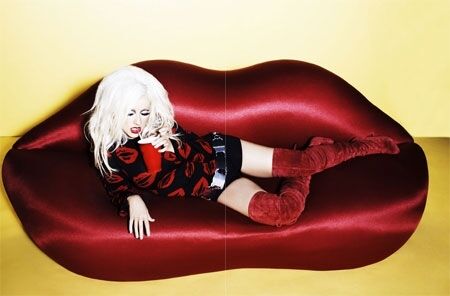 lourdes sanchez bayas — October 24, 2008 — Pop Culture
References: celebritysmackblog
Pop music diva Christina Aguilera has released the photos for her upcoming album, and they are as steamy as expected.

In the shoot, the peroxide platinum blond is seen posing on a gigantic red lip sofa and wearing black hot pants, a black top peppered with red lips, and red thigh-high boots.

There is another erotically-charged, and kind of playful, image where the pop diva is wearing what appear to be horizontally striped leggings while sucking on a lollipop. In that picture, Aguilera is on the floor with her legs wide open (gasp!) and up against the wall.

There are other photos with different themes where the platinum blond looks as raunchy as ever. Her male fans will not be disappointed.
3
Score
Popularity
Activity
Freshness