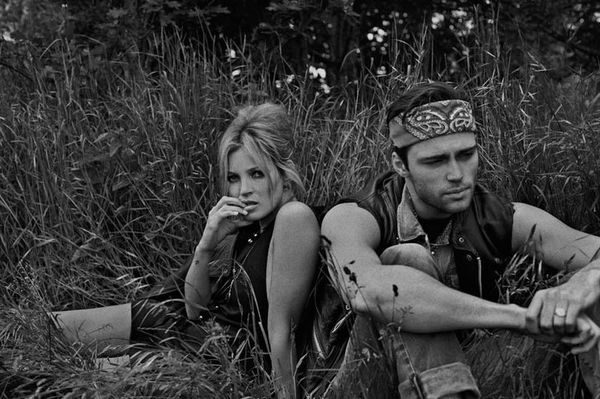 Meghan Young — March 11, 2014 — Fashion
References: ponystep & fashiongonerogue
For those who have been wanting to see Kate Moss delve into a biker chick persona, their prayers have been answered with the Ponystep Spring-Summer 2014 editorial. Dark and gritty, the black and white photoshoot captures the British supermodel as the arm candy of a hunky biker, although she looks like she could hold her own if she had to.

The Ponystep Spring-Summer 2014 editorial was lensed by Norwegian photographer Lasse Fløde. Posing alongside male model Claude Simonon, who currently stars in the Liu Jo Spring 2014 campaign, the blonde beauty was styled by Jimmy B. Kate. The wardrobe is chock full of leather jackets, chic dresses and tight shorts. Chic and edgy, the looks are complemented with the perfect tousled tresses and smokey eyes.
4.4
Score
Popularity
Activity
Freshness