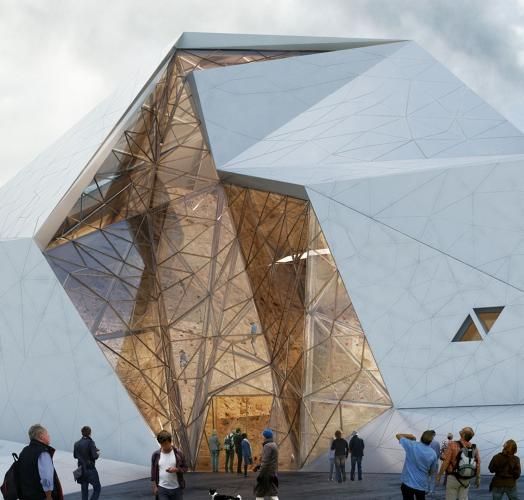 Polour Rock Climbing Hall is Inspired by the Sport

Meghan Young — February 3, 2014 — Art & Design
References: newwavearchitecture & fastcodesign
Share on Facebook Share on Twitter Share on LinkedIn Share on Pinterest
It is only appropriate that the Polour Rock Climbing Hall would take on the form of a large boulder. It is, after all, made for rocking climbing activities. What makes this structure stand out, however, is the fact that it occupies a tiny village. Stark and modern, it nevertheless embraces its rural surroundings through its nature-inspired design.

Created by New Wave Architecture, a studio based in Tehran, Iran, the exterior of the Polour Rock Climbing Hall boasts the same contours as the artificial climbing walls within. Inspired by how tectonic forces move the Earth's crust, it is made out of white fiber cement panels, which allows it to blend into its snowy surroundings. Yet the windowed crevices, which are reinforced by steel framing, is what really draws the eyes.
3.5
Score
Popularity
Activity
Freshness
Get the 2023 Trend Report FREE