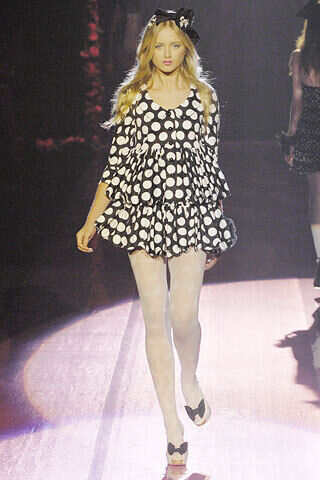 Bianca — April 29, 2008 — Fashion
References: donnaricco
Share on Facebook Share on Twitter Share on LinkedIn Share on Pinterest
If you're thinking, "The return of polka dot dress? But that look didn't go anywhere." I'm here to let you know that yes, it did. But it's back, so if you were still rocking the look, you're in luck, because you're back in style!

In fact, dresses in general are returning in a number of patterns and cuts. For a while it seemed women were all wearing pant suits to work an jeans or yoga pants on the weekend. It seems the majority of women abandoned their dresses after the 90s, a huge declaration of their unwillingness to be objectified as passive, dainty or overly domestic. Just consider the much higher percentage of women that wore dresses in the past. Even in the 90s the dress was still abundant, people were wearing short denim numbers and even the polka dot dresses that have now returned.

Though it's not proven anywhere, I like to attribute the transition back to the dress to the recent re-popularity of leggings. Women felt comfortable pairing them with longer shirts, all the while getting them used to the feel of wearing dresses.

This goes to show that woman are regaining comfort with their femininity and realizing their strength doesn't come from acting like men; on the contrary, it comes from embracing their softer sides and using their female traits to their advantage.

In time for spring, the dress looks like it's back in full force. Stores are heavily stocked with dresses, and most of them dainty and more feminine than the majority of those seen in recent years. Polka dots are huge too, and Betsey Johnson's Spring 2008 collection is a good source of inspiration; some of her pieces are featured in the gallery.