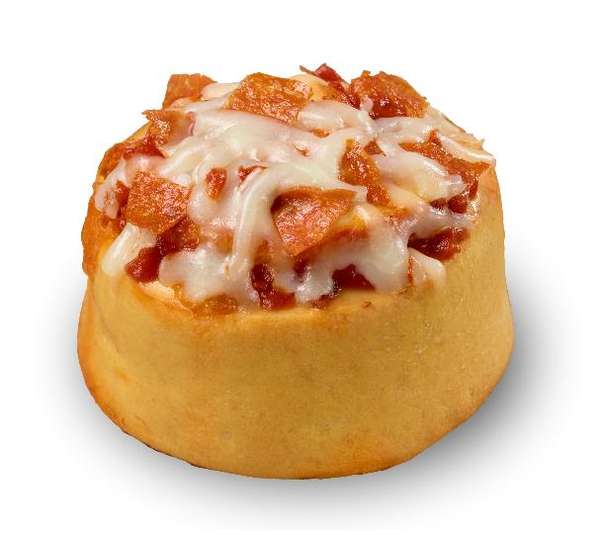 Erin Kirkpatrick — August 15, 2012 — Lifestyle
References: foodbeast & slice.seriouseats
Share on Facebook Share on Twitter Share on LinkedIn Share on Pinterest
With the Pizzabon in hand, avid food lovers can enjoy their favorite slice of pizza in a cinnamon bun-inspired format. Cinnabon, the notable dessert sellers that makes all shopping malls smell like heaven, released a new product for consumer testing. Following the legacy of food creations including the KFC Double Double and Domino Pasta Bread Bowls, this bizarre food creation has already grabbed the attention of many and caused the growling of plenty of stomachs.

Despite its name, this comfort food creation does not have any cinnamon in it, but is instead constructed in a similar way to a cinnamon roll. The Pizzabon is made using famous Cinnabon dough and is smothered with tangy marinara sauce, pepperoni and mozzarella. Taking inspiration from its predecessor, this cheesy, crunchy and doughy snack-sized wonder will have people licking their lips in pure bliss and satisfaction. After reading that description and seeing the pictures, mouths will be watering, and cravings will reach a critical level.

Although, this product is still in its testing phase, it will be on store menus within the next couple of months for $2.99. That's a small price to pay for cardiac arrest-inducing consumables.
2.1
Score
Popularity
Activity
Freshness
Access Advisory Services