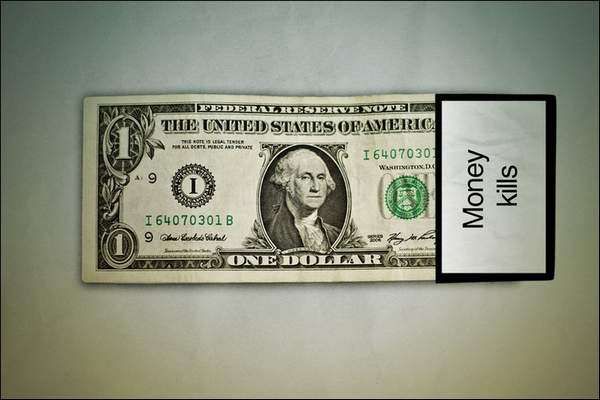 Jordy E — April 5, 2012 — Marketing
References: minimalzero & designyoutrust
Share on Facebook Share on Twitter Share on LinkedIn Share on Pinterest
Italian artist Riccardo Pittaluga has offered a new artistic take on capital in his 'Warning:Money' collection. Similar to the advisories plastered on cigarette packages, the cash notes feature small signs that read, "Money kills" and, "Money is highly addictive, don't start." The playing up of tobacco branding is notably effective here as it draws a comparison between two of life's most prominent vice's.

According to Pittaluga, the Warning:Money series is a reflection of his opposition to wealth and the accumulation of it. His website expresses disdain for the monetary value that is tied to almost any human endeavor, and preaches the importance of undoing this pervasive currency phenomenon. In essence, Pittaluga's project aims to discourage the emphasis that is often placed upon banknotes. As he has chosen to display both American and European bills, his undertaking is catered to suit an international audience, and therefore addresses a broader social issue.