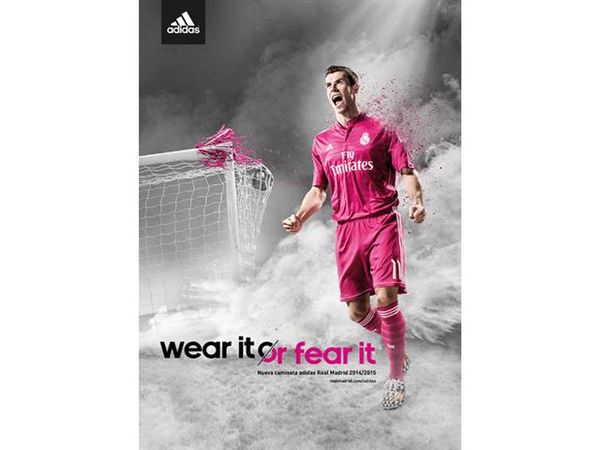 Rahul Kalvapalle — June 9, 2014 — Lifestyle
References: news.adidas & soccercleats101
Share on Facebook Share on Twitter Share on LinkedIn Share on Pinterest
Real Madrid will be wearing a pink jersey next season in what is an incredibly bold move for a soccer team. While the team's main jersey will continue to be its famous white strip, the away jersey will be pink. The jersey, made by Adidas, was released along with the tag line 'Wear It Or Fear It.'

Real Madrid's away kits have traditionally been black or blue, but in recent seasons the team has experimented with new colors including red, green and orange -- colors not usually associated with Real Madrid. The experimentation has now been taken to the next level with the unveiling of this hot pink jersey offering.

While most Real Madrid fans including myself would prefer that the team stuck to its traditional colors, there is something incredibly bold and impressive about wearing a color like pink which is seldom seen on sports jerseys.

In all fairness, if there ever was a good time for Real Madrid to unveil a pink jersey, it is now. The team recently won the Champions League trophy, considered the most difficult tournament to win in soccer, which will make it difficult for haters to make fun of their pink strip.
2.5
Score
Popularity
Activity
Freshness
Attend Future Festival