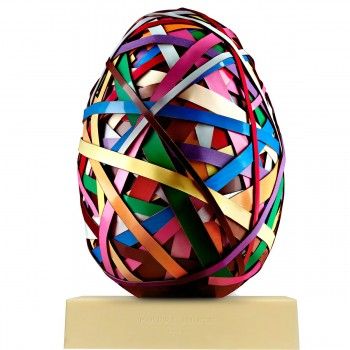 Laura McQuarrie — April 17, 2014 — Art & Design
References: pierreherme & ifitshipitshere.blogspot
Share on Facebook Share on Twitter Share on LinkedIn Share on Pinterest
True to French fashion, this year for Easter renowned French chef Pierre Hermé created an egg that's just as edible as it is artful, taking inspiration from a sculpture by Swiss artist Beat Zoderer. As well as accepting the challenge to make this artful egg completely edible, the delicate chocolate egg features layer upon layer of colorful chocolates that look like rubber bands snapped one on top of another, although it was probably not as simple to put together. Each colorful chocolate layer brings delicious and unusual flavors to the egg, including hints of citrus, spice and berries.

Hermé named his extravagantly artful egg the 'Oeuf Supramat D'Après Beat Zoderer,' stating that this is "The Supreme Egg After Beat Zoderer." Like a work of art, this small egg is a costly $300 and only 15 editions will be made.
4.3
Score
Popularity
Activity
Freshness
Jeremy Gutsche Keynote Speaker