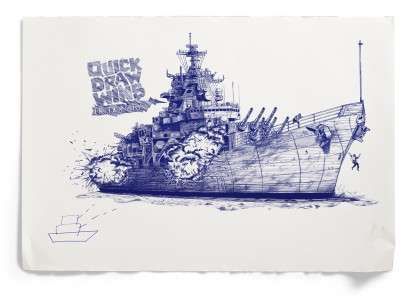 The Pictionary Quick Draw Wins Campaign Roots for the Underdog

Meghan Young — April 29, 2013 — Marketing
References: ogilvy & ibelieveinadv
Share on Facebook Share on Twitter Share on LinkedIn Share on Pinterest
The Pictionary Quick Draw Wins ad campaign hilariously compares detailed masterpiece drawings to simple stick figures. Surprisingly, it is the latter that reigns supreme. That is because the name of the game is speed. The faster a person can draw and their team guess correctly, the more victorious they will be. Since many people love rooting for the underdog, the campaign will capture the attention of quite a few.

Conceived and executed by the Ogilvy ad agency branch based in Kuala Lumpur, Malaysia, the Pictionary Quick Draw Wins ad campaign revolves around a bear fight, fencing match and war at sea. In each case, the thin stick figures are portrayed as dancing circles around their more fleshed out counterparts. Clever and playful, it will get people in the right spirit instantly.
3.4
Score
Popularity
Activity
Freshness
Attend Future Festival