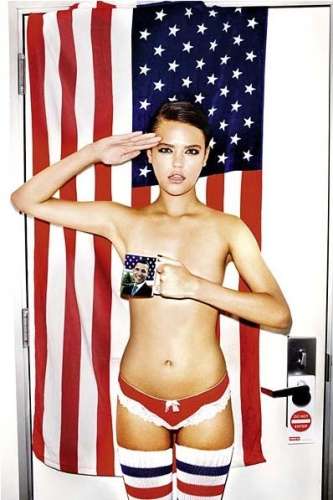 Jordan Sowunmi — June 30, 2011 — Naughty
References: tonykellyphotography & lifelounge.au
Share on Facebook Share on Twitter Share on LinkedIn Share on Pinterest
Irish-born photographer Tony Kelly is undoubtedly one of the world's best. His client list is a veritable who's who of the fashion and film worlds. But his skills are not only limited to his career as a photographer, Tony Kelly is also a burgeoning commercial director. His most recent ad for American Apparel went viral within hours of its release and has been viewed over 200,000 times.

In this collection of photographer Tony Kelly's work, we see the Irishman's ability to take a high fashion photo that is both sexually and stylistically alluring. One look through these photos and it's easy to see how this former war photographer parlayed his violence-influence career into one that has seen him shoot editorials for GQ, Vanity Fair, and Playboy among others.

It's only a matter of time before the same skill that took Tony Kelly to the top of the photography game helps propel him toward the same successes as a director.

Implications - There are few things more effective in a marketing campaign that sex appeal. By unabashedly appealing to the sexual obsession, the company draws attention to its product from potential consumers, the media, and critics of the ad's sexual content.
6.3
Score
Popularity
Activity
Freshness
Jeremy Gutsche Keynote Speaker