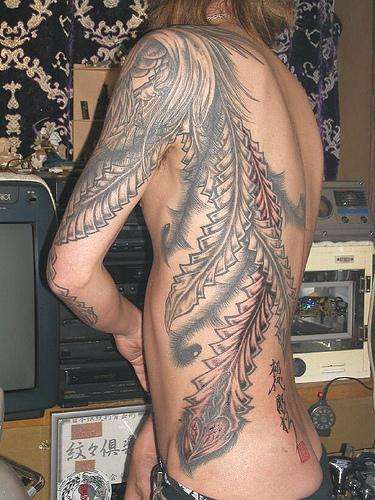 As as the mythical fire bird can never have too many feathers or flames from which it rises, phoenix tattoos lend themselves particularly well to building, gradually adding more detail as time goes on; it's also the reason phoenix tattoo sleeves are so popular.

Phoenix tattoo designs often feature a scaley body, like that of a dragon, with elegantly long, exotic wings, sometimes with a few stray feathers resembling a peacock's. Phoenix tattoos usually feature a sharp beak and talons, like a bird of prey, yet they have the physique of a bird of paradise. While some phoenix tattoo colors are heavy on red and orange, to represent fire, others are rich in royal blues and purples, while some are vibrant mixtures; others are just black outlines.

While they're all focused on the same dragon-like bird rising from the flames, these pictures of phoenix tattoo designs differ greatly in their appearance, location and, no doubt, meaning to the person whose body the phoenix tattoo is inked on.

Alien Ink
These Extraterrestrial Tattoos Are Out of This World