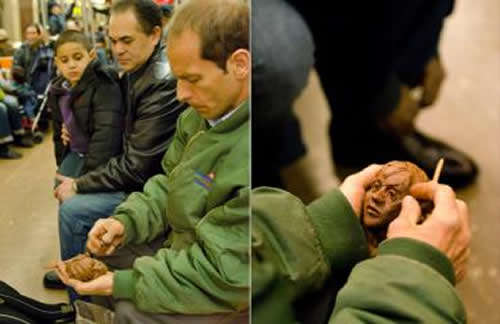 Ariel Weber — December 6, 2012 — Art & Design
References: peterbulow & odditycentral
Share on Facebook Share on Twitter Share on LinkedIn Share on Pinterest
Peter Bulow creates sculptures of his fellow commuters on New York City subways. Rather than listening to his iPod or reading a book, he decides to make use of all of the countless time spent on his commute by practicing his sculpting techniques.

The artist, who is a psychiatrist by trade, is mostly intrigued by an individual's psyche, identity and past struggles. By sculpting these faces, he tries to get a glimpse into their minds even though he is aware that he will never fully be able to. “Even if I did the same person all my life, the same portrait over and over, I would never really get them. That’s what’s fascinating about it.”

Since beginning four years ago, Peter Bulow continues to pursue his passion with fervor and determination. Once he spots an intriguing face, he immediately begins to sculpt as unlike conventional models who stay put for as long as you need, there is always a possibility that his model could get off at any moment.
2.2
Score
Popularity
Activity
Freshness
Get Better and Faster