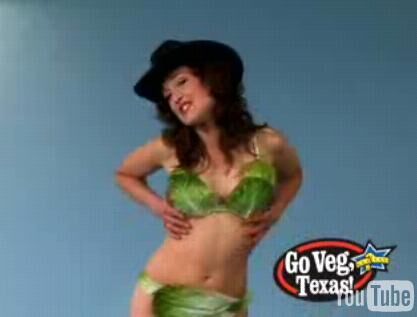 "The lone Lettuce Lady wanted to draw attention to the fact that the state where Alicia's ad was banned just happens to be dominating the list of fattest American cities," the organization explained. "In fact, four of the top 10 are in Texas! Luckily for the Lone Star State she created an easy plan to help Texans lose weightâ€”by going vegetarian!"

The video clip is a pro-vegetarian ad and includes PETA's spiel on why switching to a vegetarian diet is a positive step to take, both for personal health, the well-fare of animals, and for the society as a whole.