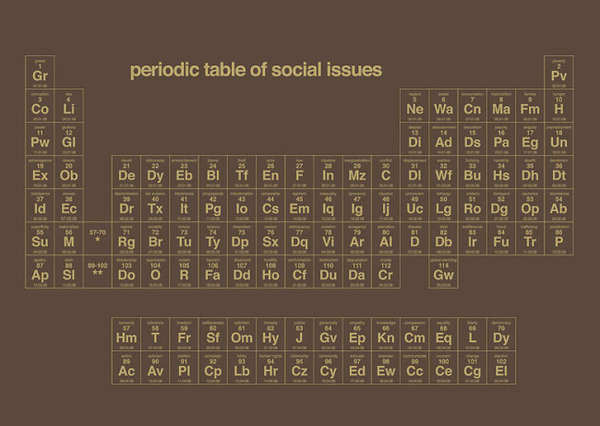 — July 17, 2013 — Pop Culture
References: wearedorothy & lostateminor
Share on Facebook Share on Twitter Share on LinkedIn Share on Pinterest
The new 'Periodic Table of Social Issues' by Dorothy is a hilarious and creative print that organizes every negative personality trait you can think of into a chart resembling the scientific Periodic Table of Elements. Each personality trait or action is listed as a two-lettered element. For example, "fascism" is listed as element "Fa," while "hostility" is represented by "Ho."

The chart features as many elements as its original inspiration (115), making it a quite thorough examination of negative traits that exist within everybody, but which no one will admit to. After scanning through all 115, it becomes clear that at least four or five of Dorothy's listed traits are embedded into your personality, whether you're a liar, a tyrant, or even a glutton.

With this chart, Dorothy makes it pretty clear that no one is perfect; everyone has their own social issues.
4.1
Score
Popularity
Activity
Freshness
Jeremy Gutsche Keynote Speaker