Gadgets for the Perfect Goatee 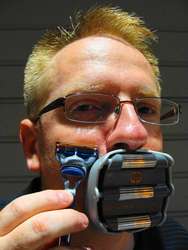 Alex Covert — June 27, 2008 — Business
References: goateesaver & prweb
Share on Facebook Share on Twitter Share on LinkedIn Share on Pinterest
It's a cross between a football mouthpiece and an "As Seen On TV" grooming product. It's called the GoateeSaver and it's the brainchild of Scott Bonge. Simple idea, really. You bite down on the mouthpiece, dial in the width to fit your desired goatee shape, and cut around it, the plastic edges blocking the blades from your hairy man-mask.

Scott's GoateeSaver was featured on the Tonight Show and since then, has received an enormous amount of orders.

Implications - There's an old adage that says, "Real men wear goatees." There's an even older one that says, "Not all men can grow goatees," and unfortunately I fall into the second class. Nevertheless, the GoateeSaver looks like an incredible creation for men who fight the daily facial hair battle.
5
Score
Popularity
Activity
Freshness
Get Trend Hunter Dashboard