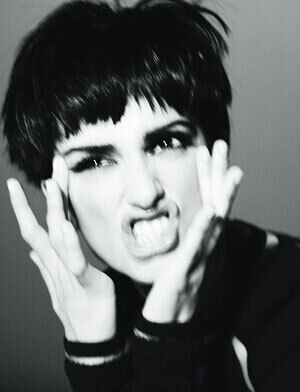 Ayman — August 9, 2008 — Pop Culture
References: wmagazine
Share on Facebook Share on Twitter Share on LinkedIn Share on Pinterest
The gorgeous Penelope Cruz is featured in an unusual photoshoot and on the cover of the recent August 2008 issue of W magazine. Photographed by Mert Alas and Marcus Piggot, Cruz is captured in unique and somewhat weird poses with a super short hair-do.

Cruz was styled by Alex White in a white Tom Ford shirt and black gear from Yohji Yamamoto and Louise Goldin.

The 34-year-old Spanish beauty confesses in the interview that she avoids celebrity gossip, “I try not to go on the Internet and read about myself. It’s a guaranteed way to get angry for no reason. You start looking at yourself from the outside, from the wrong place. And everything is out of proportion. The good things, the bad things—everything.”

“I think it’s disgusting. It’s dangerous and nasty, and bad for our society in so many ways. And it’s getting worse every day. It affects me directly, but I really believe that this culture of gossip affects our society on a much deeper level, on an ethical level. It’s what kids see and hear every day, and it will affect future generations in ways that we cannot even imagine.”