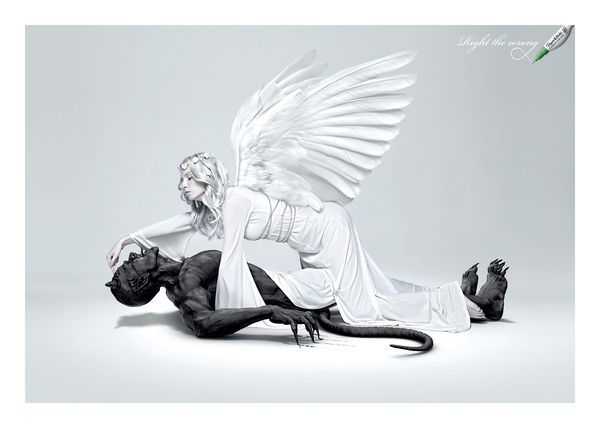 Meghan Young — May 2, 2014 — Marketing
References: tbwa.my & adeevee
Share on Facebook Share on Twitter Share on LinkedIn Share on Pinterest
The Papermate Liquid Paper ad campaign takes on a very dramatic stance when it comes to its correction pen. It depicts it as a powerful force of good that can destroy the face of evil. Since many people, especially those with a stickler for grammar, do feel that typos are a form of evil, the angelic and heroic interpretations of this stationery staple is not so farfetched. It reads, "Right the wrong."

Conceived and executed by TBWA, an ad agency based in Kuala Lumpur, Malaysia, the Papermate Liquid Paper ad campaign personifies the products as an angel, white wizard and Perseus. The legendary scenes of the Devil, witch and Medusa's demise was art directed by Loo Kok Seng with creative direction by Chow Kok Keong and Saad Hussein.
4.1
Score
Popularity
Activity
Freshness
Get Better and Faster