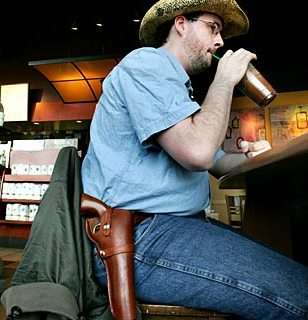 Elsa Blaine — June 9, 2008 — World
References: opencarry.org & latimes
Share on Facebook Share on Twitter Share on LinkedIn Share on Pinterest
Again, I find myself stunned by what I didn't know. According to an article in the L.A. Times a number of gun owners in the U.S., "are part of a fledgling movement to make a firearm as common an accessory as an iPod. Called 'open carry' by its supporters, the movement has attracted grandparents, graduate students and lifelong gun enthusiasts."

28-year-old Kevin Jensen from Utah has always carried his weapon in a holster under his clothing, â€œthen one evening he stumbled across a site that urged gun owners to do something revolutionary: Carry your gun openly for the world to see as you go about your business.â€

It seems that, â€œIn most states there's no law against that,â€ notes the Times.

â€œJensen thought about it and decided to give it a try. A couple of days later, his gun was visible, hanging from a black holster strapped around his hip as he walked into a Costco. His heart raced as he ordered a Polish dog at the counter. No one called the police. No one stopped him.â€

Maybe I am totally naive, but I find this just astounding! Is this for real?

If it is, women can seek inspiration here: