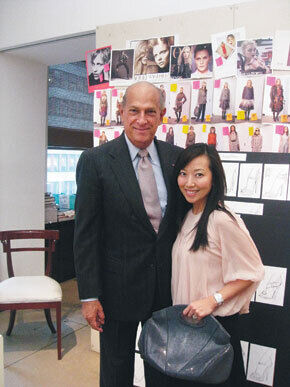 Just like Perez Hilton was able to establish himself as a legit source of celebrity gossip, a number of fashion bloggers have established their own credibility as style gurus. The fashion houses and PR companies are agreeing.

"All these things we've been hearing about for years are starting to come through," says Alex Bolen, CEO of Oscar de la Renta. "In the blogosphere, the wheat is being separated from the chaff. I would say that respected and trusted authorities are emerging."

"We as brand managers spend a lot of time trying to protect and control our environment," Bolen adds. "There is a certain giving up of control once things go out on the Internet:.[But] my feeling is that it will happen anyway, so I'd rather be involved."

Once they're engaged with designers like de la Renta, is "blog" still the right term to describe them? Take Coutorture as an example. Julie Fredrickson started it like any other fashion blog, but as it grew, designers began sending samples, and soon the site began producing their own photo shoots, creating beautiful online editorials worthy of a high end fashion magazine spread. Their fall shoots included Oscar de la Renta and Isaac Mizrahi.

"I got tired of blogging in a lot of ways," Fredrickson says. "A lot of people are focused on re-blogging stuff. It's not actually media â€” it's looking at photos and commenting on it. Fast, real-time shoots, sort of guerrilla fashion spreads, are the next revolution."

Fashion Tribes, of which Lesley Scott is editor in chief, is another site that's moved up in status.

"There's a weeding-out period," says Scott. "There are higher standards now. It's not enough to have a blog. You have to earn your readership on a weekly and daily basis."

I have to say, after reading about various fashion bloggers, I have a lot of respect for Tina Craig of Bag Snob, featured in the photo with de la Renta. She gets sent a lot of bags from designers and PR companies, but always sends them back unless she's using them as a contest give away. Now that takes discipline, Craig gets my admiration for sure.

Bag Snob gets about 500,000 page views per month which helped earn her the privilege of meeting designers like de la Renta in the flesh.

"I got more out of him in that hour than in any of my years in the fashion industry," Craig says.

"We are not deluded in thinking our blogs will ever replace Vogue or Allure, but we think we strive to be a strong supplement to them and fill a niche that we feel is missing," she adds.