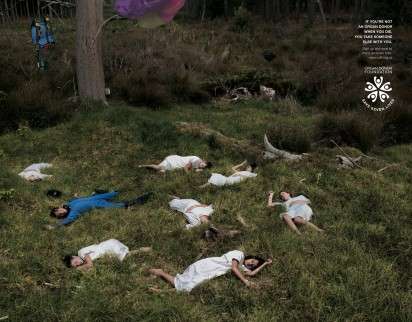 Meghan Young — April 21, 2012 — Marketing
References: lowebull & ibelieveinadv
The death of a loved one is never a small thing, but if that person is not an organ donor, the Organ Donor Foundation campaign shows how that one event can spread to cause more unnecessary deaths, similar to the butterfly effect concept. Although the tagline is pretty blunt, stating the risk of taking someone else's life by not being an organ donor, it will shock people into considering becoming one.

The Organ Donor Foundation campaign was conceived and executed by Lowe, an ad agency based in Cape Town, South Africa. Photographed by Gerard Turnley, it depicts the accidentally deceased individual surrounded by dead hospital patients that he could have saved.