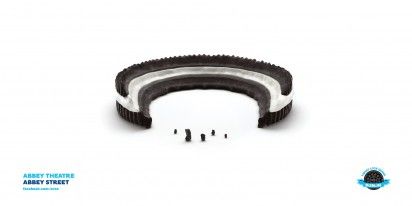 The Oreo Dublin Campaign Focuses on Culture and Art

Meghan Young — November 5, 2013 — Marketing
References: draftfcb & ibelieveinadv
The Oreo cookie might have been first conceived in New York City, but the Oreo Dublin campaign shows that it is not solely popular in the United States of America. Although it might be the best selling cookie in that particular country, the company is looking to create as much of a wave in the rest of the world. In this case, the Oreo Dublin campaign focuses on the capitol of Ireland.

Conceived and executed by Draftfcb, an ad agency based in London, United Kingdom, the Oreo Dublin campaign does so by honing in on some of the things that makes the city so great. This includes the festivals such as the Bram Stoker Festival as well as museums including GAA Museum and Dublin Writers Museum.
4.2
Score
Popularity
Activity
Freshness