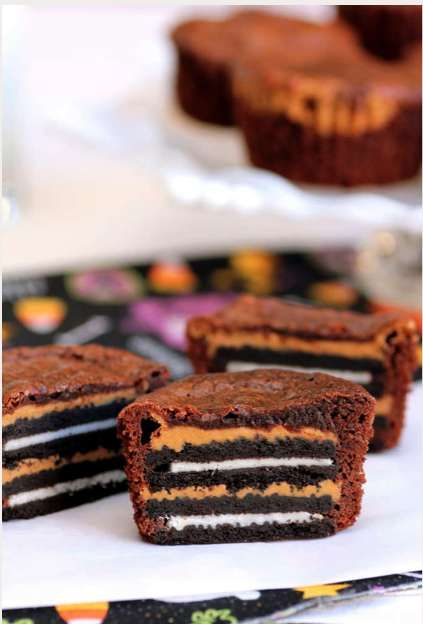 This Oreo and Peanut Butter Brownie Recipe is a Deceptive Dessert

Erin Kirkpatrick — September 24, 2012 — Lifestyle
References: instructables
Share on Facebook Share on Twitter Share on LinkedIn Share on Pinterest
This Oreo and Peanut Butter Brownie Recipe is the essence of what dreams are made of. Who wouldn't want to enjoy the comfort of a classic Oreo cookie, the smoothness of creamy peanut butter and the dense deliciousness of a chocolate brownie simultaneously? The majority of the population would respond in the affirmative if they were asked if they wanted such a dessert.

After baking this multidimensional dessert, any baker is sure to earn the well-deserved title as a divine dessert-creating god or goddess. Coincidence or not, the Peanut Butter Brownie Recipe will fit seamlessly into the Halloween spirit with its black and orange color coordination.

For those who enjoy the finished result of baking rather than the process itself, these brownies are easy to make, allowing for more time savoring sweets and less time slaving in the kitchen to create them. All one needs to do is prepare some brownie mix, smother Oreos in peanut butter and stack one on top of the other. Then simply cover the classic black and white cookies with the prepared brownie mix and bake.

From the outside it will appear to be a standard, run-of-the-mill brownie. Just like the age-old saying goes don't judge a book by its cover, now the same can be said for desserts.
2.3
Score
Popularity
Activity
Freshness
Jeremy Gutsche Keynote Speaker