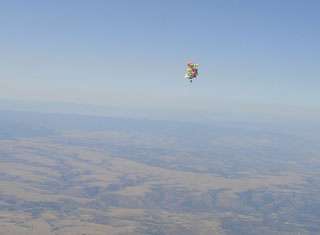 Ben Preiss — July 10, 2007 — Unique
References: clusterballoon.org & ktvz
Share on Facebook Share on Twitter Share on LinkedIn Share on Pinterest
After making the trip in nine hours athveraging an attitude of 11,000 ft., Kent Couch the owner of the Stop and Go Mini-Mart in Bend, Oregon, was in good spirits and uninjured. He did however loose his lawn chair and the gear that was attached to it (including a video camera) because the four helium balloons still attached as he landed pulled the chair out of his grasp. A $200 reward is being offered for its return. The aerial photo was taken at 11,500 ft by a pilot dropping fire jumpers that happened to be in the neighborhood. It's been 25 years since the man's first known lawn chair balloon flight, the mind boggles at what one man and a piece of garden furniture can do with enough helium and balloons. The skies the limit!

The video isn't of this guy, its of other loonies minus lawn chairs, but what the heck.