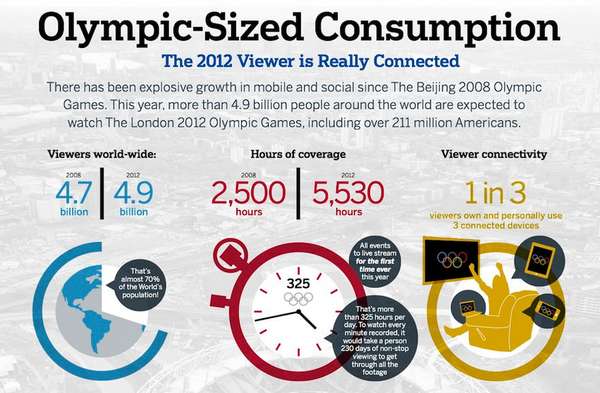 Social media and the usage of mobile devices has grown immensely over the last few years and shows no signs of stopping anytime soon. With over 4.9 billion people expected to tune into the summer games, this is one event that is universally recognized around the world. The hours of coverage are expected to double this year, going from 2,500 hours in 2008 to a whopping 5,530 hours. The London 2012 Olympics will be the first ever to have all events available with live streaming -- providing even those without television access the opportunity to feel the summer games fever.

So, get ready to tweet and stream your hearts away since the Olympic-Sized Consumption infographic predicts major levels of interaction.
5.3
Score
Popularity
Activity
Freshness
Get the 2021 Trend Report FREE