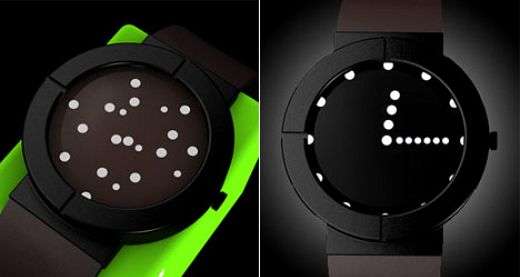 Ben Preiss — January 1, 2008 — Art & Design
References: technabob & geekologie
Share on Facebook Share on Twitter Share on LinkedIn Share on Pinterest
This is a great concept timepiece by designer Lv Zhogfang. The watch face appears as a random field of moving â€œstarsâ€ or more like balls when the watch is held still. When the wearer shakes their wrist or the glass is tapped, the balls form the hands and hours markers!

"While still in the early stages of development, it doesn't seem like it would be that difficult to manufacture. And if they're not too expensive I'd get one. It's definitely a step up from the "shake activated" watch I have now. When you shake mine the minute and hour hands come off and float around inside. It would be cool if that was supposed to happen, but it's not. Stupid Folex. "

Implications - The digital age has caused consumers to seek an element of technological interaction with all of their pieces, including watches, apparel and more.
2.3
Score
Popularity
Activity
Freshness
Attend Future Festival Virtual