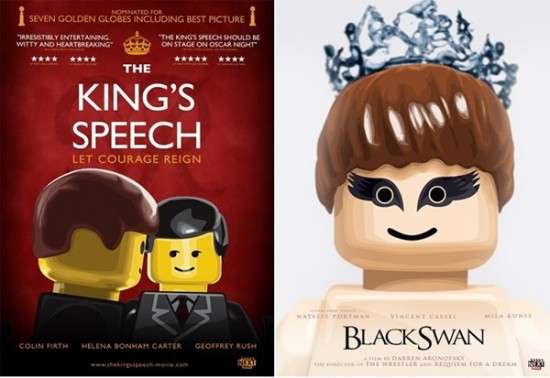 Peter Vallas — March 24, 2011 — Pop Culture
References: oldredjalopy & leetlady
Poster creation shop OldRedJalopy has a group of very original artists. The one-of-a-kind poster shop creates their own designs while being irreplaceable by next to none.

The latest creation from OldRedJalopy is the LEGO Oscars series which takes the famous actors in the Oscar-nominated film posters and replaces them with the smiling yellow figurines.

The LEGO-like tribute to these award-winning films is both accurate and quite funny. OldRedJalopy brilliantly recreates the posters of Black Swan, Inception, Toy Story 3, True Grit and the other nominees for Best-Picture at this year's Oscars.

Whether you’re a fan of the movies, LEGO or just want a fun poster for your living space, the LEGO Oscar series by OldRedJalopy will really liven up the room.
3.9
Score
Popularity
Activity
Freshness