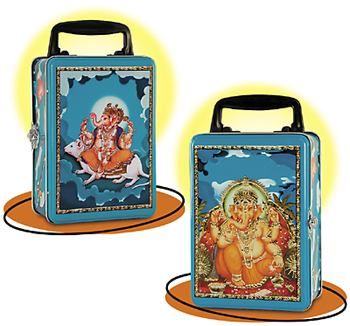 thischick — March 12, 2007 — Art & Design
References:
Share on Facebook Share on Twitter Share on LinkedIn Share on Pinterest
What do Hanuman, Shiva, Lakshmi, Krishna, and Ganesh have in common? They are Hindu Gods that have been immortalized forever on a lunch box. If you want your lunch to be coming to you from a calm and centered place, then these lunchboxes just might be for you. Ohm Nama Shiva!

Implications - Recreating religious icons on common items, such as the Hindu Lunch box, has become a part of pop culture. Consumers have modernized the way that they display their religious affiliation. With the popular T-shirts reading 'Jesus is My Homeboy' serving as an example, companies can shift their products towards the niches that practice religion but maintain a more modern sense of humor.
3.7
Score
Popularity
Activity
Freshness
View Innovation Webinars