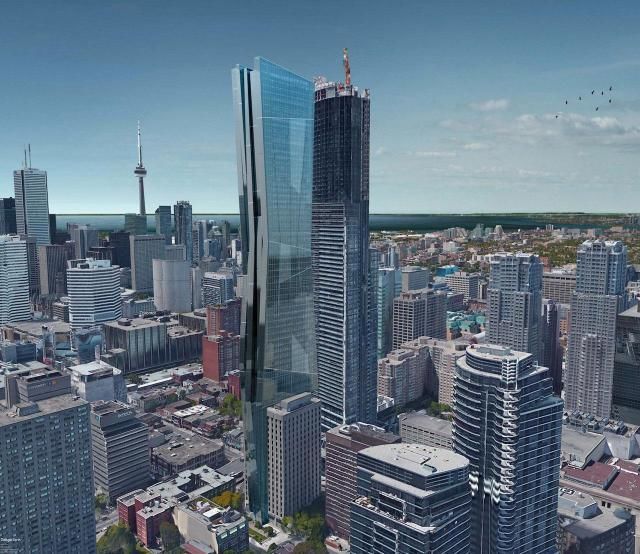 Madison Mackay — January 5, 2018 — Art & Design
References: urbantoronto & urbantoronto
Share on Facebook Share on Twitter Share on LinkedIn Share on Pinterest
Marwest, a Winnipeg-based developer has proposed an ambitious office building addition. The original building is a 19 storey office tower at 415 Yonge St, Toronto Ontario. and Marwest has proposed a 42 storey addition atop the existing structure. The addition will be completely residential, consisting of 304 one bedroom units, 94 two bedroom units and 52 three bedroom units. The architects have created a layered glass design that will be one of the first of it's kind to be built in Toronto, with visually appealing glass bands across the entire exterior and an angular vertical design.

Residential additions to existing office towers are not common in Toronto, and this one fuses modern detailing with the aesthetic of the original tower, built in 1974. This proposal has yet to be approved, but it's plans are already gaining attention among urban residents and architecture enthusiasts.
4.8
Score
Popularity
Activity
Freshness
Get the 2021 Trend Report FREE

Modernist Estate Pavilions
The St. Gerlachus Pavilion is on an Historic 17th Estate in Holland