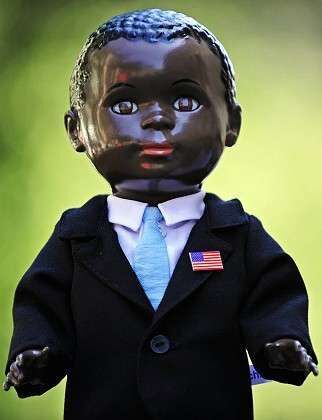 The 14-inch doll is rocking a black suit, complete with a Stars-and-Stripes lapel pin, a white shirt and sky-blue tie. This collector's doll is available in a limited edition of 999 and it is priced at a hefty â‚¬139 ($216).

Offermann, who admits to being an admirer of Obama, has made dolls of public figures such as German Chancellor Angela Merkel, Pope Benedict XVI and the Dalai Lama.

This is what I think: For starters, the doll does not look a bit like Obama. Moreover, and at the risk of turning an innocuous gesture into something nefarious, that doll looks more to me like those blackfaces that were most commonly used in the minstrel performance tradition which played a significant role in cementing and proliferating racist images, attitudes and perceptions about black people worldwide. That's what I think.
3.6
Score
Popularity
Activity
Freshness
Get the 2021 Trend Report FREE