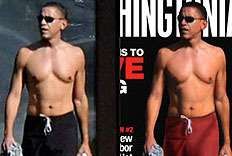 The magazine used a widely circulated photo of Obama taken while he was on vacation with his family in Hawaii last year. The Washingtonian changed the color of his swimming trunks from black to maroon and altered the background to a dramatic and flashy black. The monthly glossy features Obama as part of the cover story that reads “26 Reasons to Love Living in Washington.” Barack Obama, whom the mag refers to as “Our new hot neighbor,” is ranked #2 on the list.

In the original photo the president is wearing a black suit and walking from what appears to be sliding glass doors leading to a living room. What also appears to be altered from the original image is the contrast and the color balance of the president’s skin. On The Washingtonian’s cover the sun striking Obama’s chest makes him appear more golden, almost glistening In the world of news, that’s unethical. The rule of thumb is, if you want to change what’s in the photo, choose another photo.

Making Obama into a man wearing brilliant red surfer trunks, instead of a more modest black pair, making the image more dramatic by having him walking out of darkness, and changing the exposure so he looks more gilded changes viewers’ ideas about who the man is.

Bloggers, media commentators and readers are split on the so-called “Swimsuit Edition” of the Washingtonian with the photoshopped picture of Obama. While some think it is a great picture of the President, others believe that it is disrespectful to display the commander-in-chief half-naked and to have used an old, doctored image in doing so.