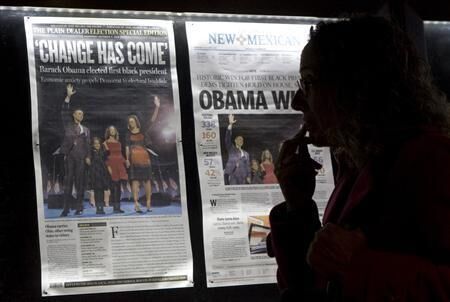 Major newspapers sold out entirely, causing some really savvy folks to recognize the business opportunity. About 800 people quickly uploaded posts on eBay and began the auction for highest bid. The Washington Post "Obama Makes History" edition was going for $41, Chicago Tribune and Chicago Sun-Times were being sold in a combo pack for $50, while the The New York Times ended up being worth $400 to some folks.

"This kind of demand for our newspapers is unlike anything we've experienced in recent history," Tribune CEO Randy Michaels said.

"This is a clear demonstration that people continue turning to their local newspaper to help them understand and interpret the news of the day, and that is especially true when big events happen."

Makes you wonder how long it will be before they sell Obama newspaper pillows.

Newspaper have been on the decline for a while, and many people speculated that the end of print media could be near. Check out some more on that below.
0.8
Score
Popularity
Activity
Freshness
View Innovation Webinars