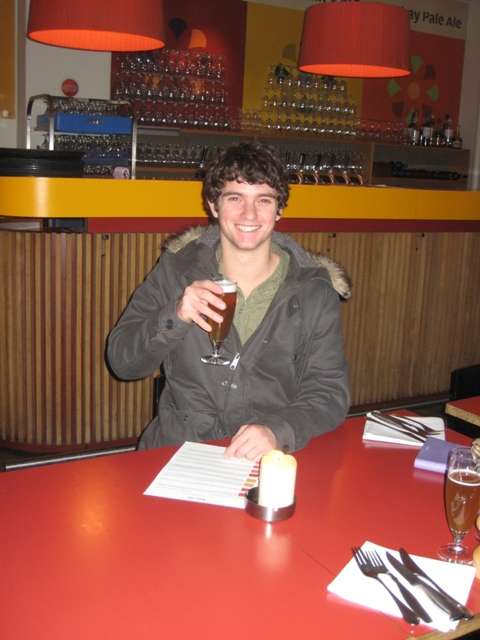 Green Beer is on Tap at Copenhagen's Norrebro Brewhouse

When it comes to eco-friendly beer, Nørrebro Brewhouse has the world's first CO2 neutral beer, 'Globe Ale.' The beer isn't the only thing at Norrebro Brewhouse that is eco-friendly, however; Head chef Per-Thore Horst Johansen has incorporated a variety of "climate friendly" dishes into the menu. Pork paté and milk-poached cod are just two of the edible environmentally friendly options available at Nørrebro, which diners can enjoy on either of the restaurant's spacious two-storeys -- or, if you've thought ahead, at the "Brewmaster's Table," an elevated platform diners can reserve to watch the beer being brewed as they eat and drink. Nørrebro also has a bar and courtyard beer garden open to guests during the summer.

Speaking with Kasper Larsen, Nørrebro Brewhouse's Beer Ambassador, it's apparent that, in addition to eco-friendly practices, Nørrebro prides itself on its selection of delectable brews, which have received awards for their great taste (Nørrebro's Little Korkny Ale won gold at the World Beer Cup in 2010).

Going green is often advocated, but seldom executed in such a way that can be easily enjoyed and appreciated by the masses. So, the next time you're in Copenhagen, be sure to check out Nørrebro Brewhouse.
2.1
Score
Popularity
Activity
Freshness