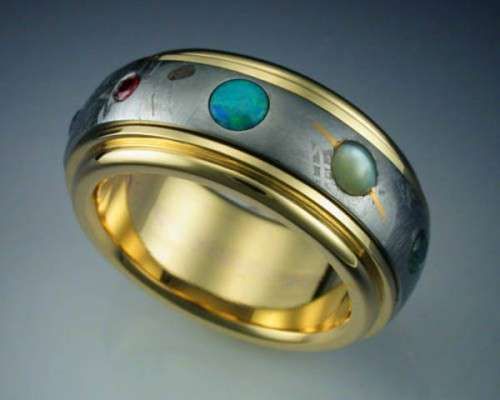 Meghan Young — May 25, 2012 — Fashion
References: jewelrydesignsformen & neatorama
Share on Facebook Share on Twitter Share on LinkedIn Share on Pinterest
The Nine Planets Ring is made for astronomers, astronauts, astrologists and those who simply love to gaze up into the night skies for a glimpse of far-off planets and dying stars. A stunning piece of jewelry, it is a beautiful rendition of the planets circulating in the solar system above.

Created by Jewelry Designs for Men, the Nine Planets Ring is not only a representation of these nine celestial bodies, it is made out of actual meteorite in addition to gold and precious gemstones. Each gem symbolizes a planet. For instance, Mercury is represented by a rust colored sapphire, Venus by a golden sapphire and Earth an irradiated blue diamond. Weighing 26 grams, the Nine Planets Ring can't be sized, but it can be custom made to fit any finger size.
3.4
Score
Popularity
Activity
Freshness
Get the 2023 Trend Report FREE