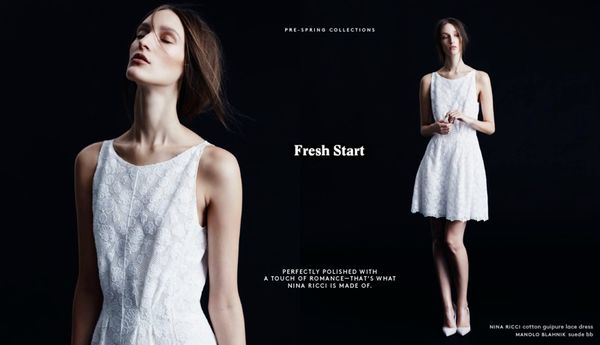 Meghan Young — January 29, 2014 — Fashion
References: ninaricci & fashiongonerogue
As minimalist as the images that make up the Nina Ricci Resort 2014 lookbook are, there is a dramatic flair that really brings an edginess to the otherwise ladylike outfits showcased throughout. As though enveloping the model in its dark and cold embrace, the black void of a backdrop adds a sense of mystery to the photoshoot.

Starring model Franzi Mueller, the Nina Ricci Resort 2014 lookbook is titled 'Fresh Start.' It is refreshing to see a different interpretation of such a common sentiment. In a way, by using such a backdrop, the bright fashion exclusively becomes the fresh start women have been craving. From a demure lace dress to a stunning strapless gown and a stretch tweed pencil skirt, the American designer provides people with strong and feminine pieces for the season.
5.6
Score
Popularity
Activity
Freshness