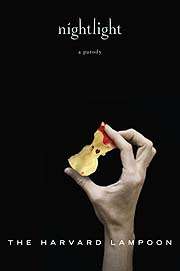 'Nightlight' Mocks 'Twilight' and It's Hilarious

Jacqueline Parrish — November 14, 2009 — Business
References: randomhouse & abebooks
Written by the Harvard Lampoon, “Nightline,” a hilarious parody of the “Twilight” series that has teenage girls swooning everywhere, follows Bella Goose -- who drives a U-haul truck -- and Edwart Mullen, who is a computer geek who never eats, and has absolutely no interest in girls whatsoever.

The cover of “Nightline” says, “About three things I was absolutely certain. First, Edwart was most likely my soul mate, maybe. Second, there was a vampire part of him—which I assumed was wildly out of his control—that wanted me dead. And third, I unconditionally, irrevocably, impenetrably, heterogeneously, gynecologically, and disreputably wished he had kissed me”.

“Nightline” is a very amusing mock of the “Twilight” series, and is a book that I think I will be picking up.
3.5
Score
Popularity
Activity
Freshness