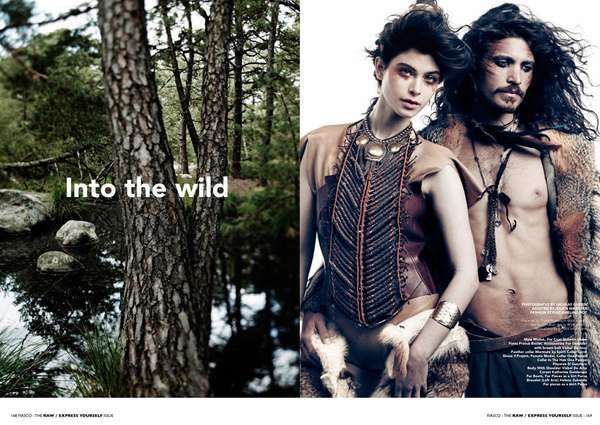 Corinne Guirgis — September 3, 2011 — Fashion
References: fiascomag & touchpuppet
Share on Facebook Share on Twitter Share on LinkedIn Share on Pinterest
Get on board this season with the Nicolas Guerin August 2011 Fiasco Magazine editorial. Shot and styled by Alfredo Albanesi, the shoot is nothing short of fierce. Showing off what would happen if Captain Jack Sparrow was let loose in the woods, model Adam rocks the raw, animalistic look that gets all of the lady lions excited.

Appropriately entitled 'Into The Wild,' the shoot is for the mag's Raw/Express Yourself issue and Guerin does the theme incredible justice with his unforced chemistry with Adam's co-stars and models Pamela, Kriss, Eugeniy, Stephanie and Sheri. But the savage shoot would not be nearly as raw and expressive without the wild styles of Emaline Piot, who took the concept to new heights with animal-inspired fashions from fur vests to suede ponchos and feather accessories.