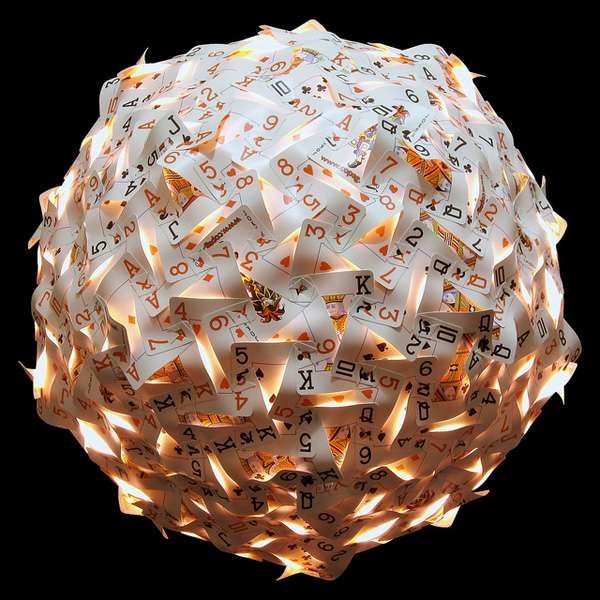 Nick Sayers Has Mastered the Art of Recycled Sphere Making

Deborah Kim — August 17, 2011 — Art & Design
References: blog.makezine & thisiscolossal
Share on Facebook Share on Twitter Share on LinkedIn Share on Pinterest
Nick Sayers is a jack-of-all trades, he is a graphic, print, web designer and developer and he is also a typographic artist. However, these upcycled illuminated spheres are unlike any past art project he has ever attempted. Sayers has created three different sculptures using extra objects lying around in the house- which include playing cards, ticket stubs and empty glass bottles.

For the playing car construction sphere Nick Sayers uses an impressive 270 playing cards to create his large-sized illuminated sphere. Each playing card has four slits cut into them so that they can lock together to create the spherical shape Sayer desired. The other two spheres are made from old metro ticket stubs, using the same construction style and the other was created using glue and glass bottles. Sayer placed a light from an internal lamp in each of his spheres so that a little bit of light would escape between the cracks to create a dramatic lighted effect.
3.4
Score
Popularity
Activity
Freshness
Attend Future Festival