5 Gadgets For Football Fans
Next
Set of
Related
Ideas 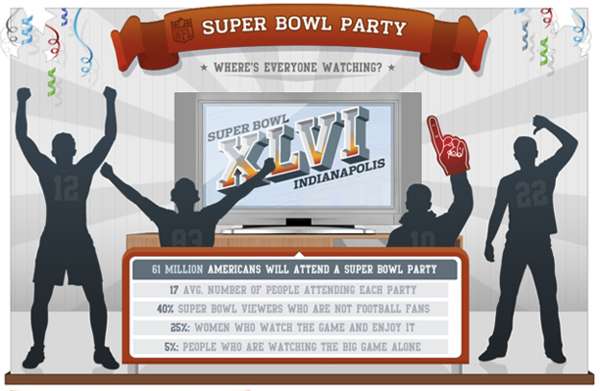 The NFL Superbowl Infographic Forecasts Who Eats What

Corinne Guirgis — February 6, 2012 — Lifestyle
References: webpronews & dailyinfographic
Share on Facebook Share on Twitter Share on LinkedIn Share on Pinterest
As the world gears up for this Sunday’s football festivities, the NFL Superbowl Infographic breaks down the most important part of this glorious day: the food. With all of the parties and hype that surrounds the football finals, the night’s edibles go far beyond finger foods. Regardless of your reasons for tuning in, one thing is for sure—if you’re watching the game, you will be eating A LOT.

According to the NFL Superbowl infographic, consumers eat enough food on Superbowl Sunday to end world hunger. That’s almost 200 million pounds of food around the globe, half of which can be attributed to chicken wings, with the other guilty parties being potato chips, popcorn, and a surprising 54.3 million pounds of avocado.

But what about beer? The official drink of the Superbowl party did not go unnoticed by the NFL, who claims that 325.5 million gallons of the alcoholic favorite will be consumed this Sunday.
1
Score
Popularity
Activity
Freshness
Get Trend Hunter Dashboard