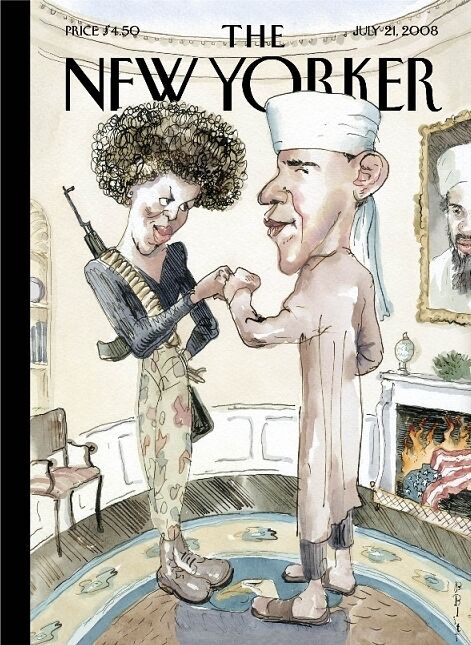 Ayman — July 14, 2008 — Pop Culture
References: huffingtonpost
Share on Facebook Share on Twitter Share on LinkedIn Share on Pinterest
Presidential hopeful, Barack Obama and his wife are featured on an extremely controversial and bigoted cover on the new issue of the New Yorker magazine. Where do I begin? Everything about the cover screams WRONG. It is tasteless, hurtful and surely offensive.

The stereotypes and horrible implications include Barrack hanging Osama Bin Laden's portrait in the oval office while he fist-pumps in victory with his wife Michelle. Did I mention that Obama is dressed like Osama while his wife dons a machine gun with the American flag burning in the fireplace?

"I think the idea that the Obamas are branded as unpatriotic [let alone as terrorists] in certain sectors is preposterous," said Barry Blitt, the artist who created the artwork, to the Huffington Post. "It seemed to me that depicting the concept would show it as the fear-mongering ridiculousness that it is."

What strange logic is this? According to this line of reasoning, people could wear racist t-shirts, blogs can use offensive images, and music videos can depict racist acts and then say they are merely showing just how horrible these things are!

At the very least, this cover is a misguided effort. Everyone involved should be ashamed.

Check out more New Yorker covers by Barry Blitt, including an equally offensive artwork depicting Iran's president Ahmadinejad as a homosexual in a public bathroom.

Altered Mindset Game Experiences
Nuro is Researched-Backed, and Designed to Inspire and Relax