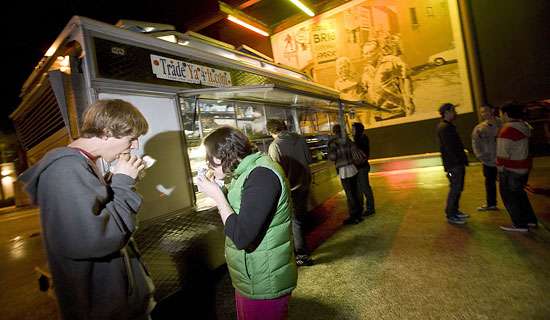 Pat Coate — February 27, 2009 — World
References: kogibbq & iht
The guys that run the Koji Korean BBQ taco truck must be onto something. Koji BBQ has an active Twitter account (@KogiBBQ), where they post their exact location du jour.

When nighttime falls in La-La Land, literally hundreds of Angelenos fire up their mobile Twitter apps and their cars and chase said truck around SoCal every night, begging for more. You just can’t beat $2 a pop for a taste of magical fusion-burrito heaven, apparently.

Dang, it makes me want to hop on a flight headed west just to join in on the culinary treasure hunt! Is this the dining experience of the future? The name is Kogi--remember it well.
6
Score
Popularity
Activity
Freshness