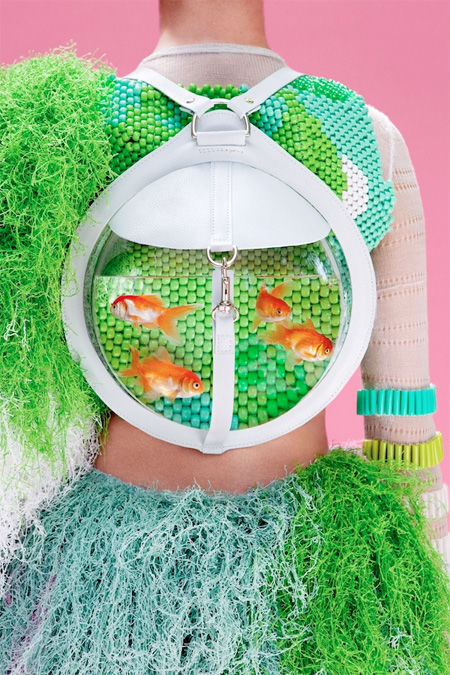 The Fishbowl Bags Has a Real Fish Inhabiting the Bag

Akihiko Tse — September 15, 2013 — Lifestyle
References: cassandraveritygreen & designtaxi
Share on Facebook Share on Twitter Share on LinkedIn Share on Pinterest
For those who just can't go anywhere without their fish, designer Cassandra Verity Green collection of 'Fishbowl-Bags' has them covered. The bags, showcased at the Central Saint Martins fashion show this year, come in both handbags and backpacks, both of which are transparent so people can peer into how your inhabiting fish are doing.

The bags are part of a collection called 'Neptune’s Daughter,' which features peculiar outfits based on an underwater theme. The Fishbowl Bags are both circular, with the handbag coming with a handle and the bag attached to a flap. The collection has, however, come in for some criticism such as from the RSPCA, which said, "We do have concerns that using a living creature to create a novel or unusual accessory encourages people to see them as replaceable ornaments."
5.7
Score
Popularity
Activity
Freshness
View Innovation Webinars