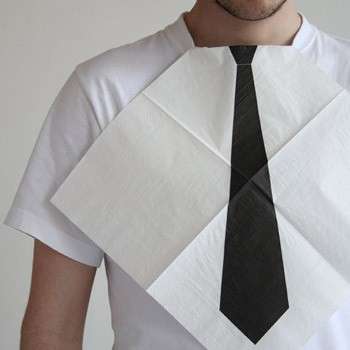 Jason Soy — May 30, 2012 — Pop Culture
References: stupid & cmybacon
I rarely see anyone uses bibs during meals anymore, but these Necktie Napkins may very well bring back the clever method of preventing food from dirtying your clothes while eating. Simply take the corner decorated with the knotted tie graphic and stuff it down your shirt, and you’ll be as dapper as Don Draper without all the effort and genetics required.

The Necktie Napkins come in packs filled with a myriad of designs. Whether you want to rock solid black or go for a more fun striped two-tone look, Necktie Napkins won’t disappoint. And females shouldn’t hesitate to use these etiquette-enhancing tools either, as demonstrated by the elderly woman in the picture also using the Necktie Napkin. And since they retail for only $6, you’d be doing yourself a disservice not to get these things.