Top 40 Media Trends in May
Next
Set of
Related
Ideas 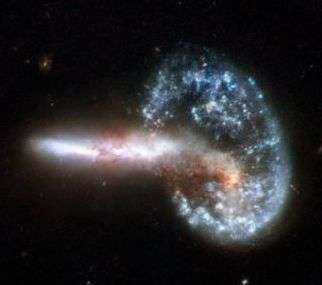 Breathtaking NASA Images to Celebrate 18th Anniversary of the Hubble

These five pics are my favorites from the "Galaxies Gone Wild" collection.

"For all their violence, galactic smash-ups take place at a glacial rate by human standards - timescales on the order of several hundred million years. The images in the Hubble atlas capture snapshots of the various merging galaxies at various stages in their collision.

Most of the 59 new Hubble images are part of a large investigation of luminous and ultra-luminous infrared galaxies called the GOALS project (Great Observatories All-sky LIRG Survey). This survey combines observations from Hubble, NASA's Spitzer Space Telescope, NASA's Chandra X-ray Observatory, and NASA's Galaxy Evolution Explorer. The majority of the Hubble observations are led by Aaron S. Evans of Caltech."

Implications - The subject of space will fascinate consumers for as long as its mystique and infinite areas to discover exist.
1.1
Score
Popularity
Activity
Freshness
Get Better and Faster