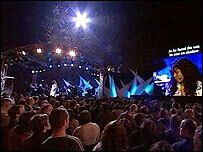 During last week's Easter proceedings, the Crucifixion was retold with the help of the city's incredible rock 'n' roll culture. The Manchester Passion was a contemporary retelling of Christ's last hours of life, featuring songs by legendary bands Oasis, the Stone Roses, the Smiths, Joy Division and New Order. Primal Scream vocalist Denise Johnson played the role of the Virgin Mary while Tim Booth, lead singer of James, played Judas.

The event was promoted by BBC three and was performed before a live audience of 6,000.

The actors performed live, accompanied by a 16-piece string orchestra. The disciples were buskers who played guitar and cello.

"Manchester Passion has a sincerity and an ability to shock and connect that is not far removed from how it must have been on the first Good Friday," said the Bishop of Manchester, Rt Rev Nigel McCulloch.

It was an innovative way of helping the modern generation connect with a 2,000 year old tradition.
4
Score
Popularity
Activity
Freshness
Access Advisory Services