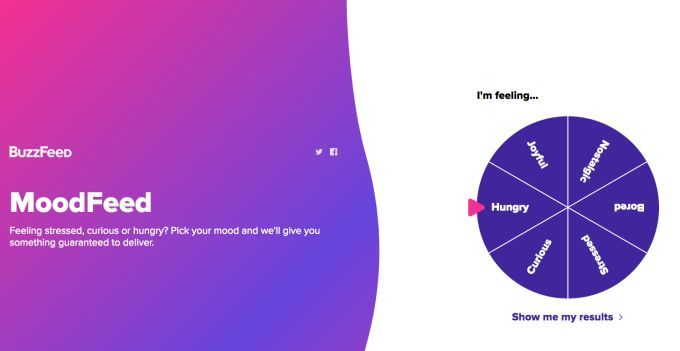 Daniel Johnson — August 26, 2019 — Tech
References: moodfeed.buzzfeed & techcrunch
Share on Facebook Share on Twitter Share on LinkedIn Share on Pinterest
Buzzfeed has added a new MoodFeed feature, which is able to recommend viewers content based on their current emotional state. Users are able to select from 6 different options, including curious, stressed, bored, nostalgic, joyful and hungry. Based on the user's selection, the MoodFeed feature will present users' articles corresponding with their selection.

In order to build the new MoodFeed feature, BuzzFeed initially identified the common moods, then found articles that could fit into each section. BuzzFeed also implemented AI tools in order to automate this process, this means that articles can be automatically sorted into each of the six categories.

The company is still identifying the best way to use the new feature and figuring out an appropriate scale and strategy for the project. The company notes that more moods could be added in the future.